Whilst the safety performance of a railway company can quite effectively be measured by its accident rates for relatively frequent, low consequence events, this approach cannot be used for rarer accidents which produce a greater loss such as collisions and derailments. In this case, it is necessary to identify and monitor a range of incidents, known as precursor events, which might indicate that the likelihood of a major accident is changing. Such an approach is vital to understand whether initiatives are bringing benefits, or whether there are underlying and escalating problems with a company’s safety management

Sotera worked with Network Rail’s Assurance & Safety Team to develop a Tool to proactively monitor Network Rail’s major accident safety performance. This enables Network Rail to periodically plot its predicted safety risk and the contribution from each precursor in order to identify significant trends, and to monitor the effectiveness of safety improvement programmes.

The Tool was based on a detailed risk model which was developed as the first stage of this work. The risk model was based on the Safety Risk Model (SRM), developed by RSSB, but with alterations to add, or remove detail as appropriate in some areas so that the basic events better match monitorable precursor events. For example, the SRM might contain an event such as “Broken rail causes derailment”, whereas the precursor risk model was developed so that it shows the number of broken rails and the proportion of broken rails which might result in a derailment.

Once the risk model was fully quantified, and the results validated and sensitivity analysis was carried out. This was a key component of the Tool as it determines how changes in basic event frequencies affect the frequencies of accidents. 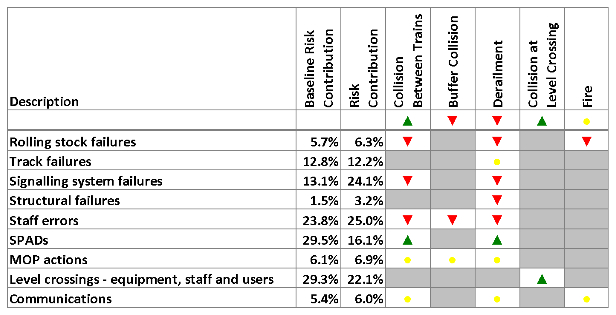 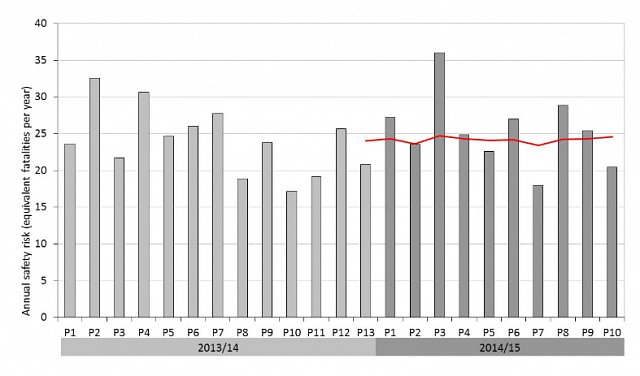